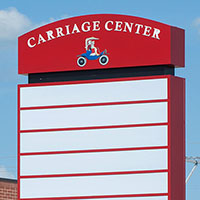 Tim Harrington and Josh Markiewicz of Coldwell Banker Commercial Devonshire Realty were successful in negotiating the sale of the last available lot remaining in the  Carriage Center project on south Neil Street in Champaign.  The lot was purchased by the fast-casual restaurant franchise, Slim Chickens.

Slim Chickens opened in 2003 in Fayetteville, Arkansas, with a focus on culinary excellence in a fast-casual setting. Slim Chickens focuses on chicken and chicken only and has developed a quality product precedent, positioning the brand as the leader in the “better chicken segment”.  The franchise now has over 30 locations located across Arkansas, Oklahoma, Texas, Missouri, Kansas, Nebraska, and Illinois and intends to grow nationwide to a footprint of 600 restaurants over the next decade.