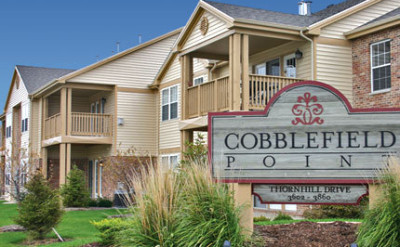 “Josh Means, Treasurer of Cobblefield Point, reported being amazed at how Stephanie was able to remain so positive and pleasant despite having four individuals in the lobby as well as a host of other issues around her. Mr. Means stated that it was a madhouse with people walking around, the telephone ringing, a copy machine running, yet Stephanie continued to smile in spite of what seemed like chaos to him. He was impressed that she was diligently working to get everyone taken care of and was not in a panic. Mr. Means stated Stephanie was “very professional, reassuring and on top of things.

The Cobblefield Point HOA Board of Directors has often stated they are very impressed with the way Jerry has handled maintenance at the complex.  They report feeling he genuinely cares about the area and goes the extra mile to provide excellent customer service. The Board asked that Jerry drive through the area a few times a week and wanted him to know that he has their full support in proceeding with any maintenance issue that needs to be addressed; he does not need to first seek their approval. The Board states they know that he is working in the best interest of the community. In closing, the Board stated Jerry is a “huge asset” to Cobblefield.”