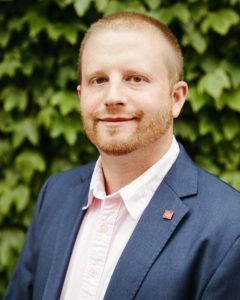 AJ Thoma III grew up around the realm of commercial real estate assisting in his first site selection in 1998.  His primary focus is on serving the commercial markets within Central and East-Central Illinois and has completed over 70 million dollars in sales and leasing transactions in his first 10 years. AJ works in markets within a 90-mile radius of Champaign-Urbana in Buyer/Seller and Landlord/Tenant Representation focusing on the Industrial, Office, Investment, Land, and Retail markets. He currently works in the markets of Champaign-Urbana, Bloomington-Normal, Decatur, Charleston, Paris, as well as several other smaller communities throughout the area.

AJ attended the University of Illinois, majoring in economics and also focusing on a wide variety of business training. He was awarded a B.A. in Economics from UIUC in 2009.

AJ is married to his wife, Michelle, and they reside in Champaign. In his spare time, AJ enjoys golfing, cooking, gardening, fishing, hunting, boating, and anything that involves being outdoors.

“In late July, 2014, I had the opportunity to work with A.J. Thoma, III, in starting the process of selling a commercial property I owned in Mahomet at 419 E. Main. Without going into detail, A.J. did a market analysis on the property that aided me in the subsequent sale which I accomplished on my own.

A.J.’s analysis was very professionally prepared, thoughtfully presented and I felt, very accurate. He was very prompt in its delivery and followed up in a timely fashion.

His performance reflected positively on himself and your organization.”

“AJ Thoma is an insightful, responsive and attentive young broker.  With his Midwest work ethic, he is a solid communicator and diligent agent.  His positive yet blunt approach to the marketplace is appreciated.  At his current pace of professional growth, we foresee a solid future in real estate for AJ.”

“Tim Harrington introduced me to AJ shortly after I purchased an office building with several vacancies and said he was the right broker for the job.  Quickly I realized that Tim was right in his choice. Within a few short months, most of my vacancies were filled with quality tenants.  Impressed with his work, I hired him to lease my newly constructed office building that had been on the market for a few years at that time.  Within 1.5 years he was able to secure tenants for the remaining 60% of unfinished space. I would highly recommend AJ for any realm of Commercial Real Estate. “

“AJ Thoma is a true professional.  He has: an excellent understanding of the overall commercial real estate market dynamics, a strong ability with numbers, the drive to get tasks done lightning fast, and the personal skills and follow through to gain strong  loyalty from his buyers and listing clients.  I would strongly recommend him for all of your commercial real estate needs.”

“AJ helped me to find offices spaces on two occasions for my practice. He is persistent, thorough, and is able to tune in to what his clients are looking for in a space. During the process of finding an office space, I appreciated AJ’s swift responses to my inquiries. I very much look forward to working with AJ again in the future.”

“I started working with AJ in late 2013 on a video gaming café concept that I wanted to roll out in several communities in Central Illinois.  Over the last 2 years I have come to appreciate all the hard work and market knowledge he displays in essentially all communities of Downstate Illinois.  We have looked into 20+ communities and have been successful in securing locations in several of those communities.  I have worked with a few different brokers since being in Illinois and AJ is my go to broker because I know he will get the job done. “

“I have had numerous business dealings with AJ over several years and would recommend him highly for any commercial real estate brokerage services.”

“The Beck Family used Coldwell Banker and AJ Thoma III, CCIM for a recent large building and tower transaction in Springfield, Illinois. Their attention to detail and hard work helped the project become very profitable. This is not my first rodeo with AJ and I will use him again and again when the opportunity is there.  I would whole heartedly recommend AJ as your next commercial realtor.”